Students from Bamberg and Bayreuth on the visit

After a short introduction by the managing director Dr. Steffen Blömer and the subsequent company presentation by the Head of Research & Development Mr. Dominik Steigner, the students were allowed to visit the factory and get to know the production. At the moment, about 200 employees in Kulmbach produce carbide rods, which represent the precursor of high-performance tools. The largest buyer of these carbide rods is Gühring KG as parent company, which produces drills and milling tools for customers such as BMW, Daimler and Bosch, but also numerous external partners worldwide are served.

Likewise, plant manager Mr. Thomas Dambacher explained that Konrad Friedrichs GmbH & Co. KG is currently implementing a major expansion of its business: in a first step, approximately € 17,000,000 will be invested directly at the A70 in Thurnau. The construction site is currently fully in the self-imposed schedule. 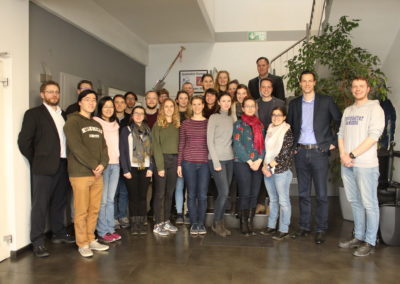